Until she blasted a hole in the floor and slid them down to certain death, and was only saved because they brought R2.

Without the droid, Leia would have killed them all. https://t.co/khMCH42NOv

First off, let me just acknowledge that there is a larger context here, though it doesn’t make this much better.

“Star Wars Kids” has been putting out these animated shorts on YouTube, featuring different Star Wars characters and trying to make each look cool.

The issue here isn’t that Leia’s featurette here is kind of goofy and inaccurate (which it is), but that it employs the same, tired modernist trope of elevating the Stronk Womyn by stepping on her male counterparts.

With Nu Star Wars, we see a Leia scornful of her rescuers, who can do everything herself, and who doesn’t need men. Wrong.

I haven’t watched all of the other shorts, but I kinda doubt any of the men are smacking Leia around in their features.

This comes as Brie Larson is crapping all over the target audience for the Marvel superhero films.

Kinda of sad – Disney used to be much more disciplined in its marketing. I guess this is what happens when ideologues take charge.

Incidentally, a little over a year ago I wrote about Star Wars’ unfortunate feminist turn. Nu Star Wars has been trying to revise Leia for a while now:

The internet is teeming and writhing with hot takes on Star Wars. Personally, I haven’t seen The Last Jedi and I feel no great desire to. I only finally watched Rogue One a few months ago on Netflix, so I may catch TLJ on TV or streaming out of curiosity someday. For me it isn’t so much moral outrage, even though a lot of the people involved in “New Star Wars” do show contempt for those of us with more traditional and conservative values. It’s more that I’ve reached my Star Wars saturation point. I still love the original trilogy. Knights of the Old Republic was great, and the old Expanded Universe was hella fun. The Clone Wars animated series was pretty well done, too.

But slapping the Star Wars label onto something isn’t enough for me to like it, and I’ve seen enough of the franchise’s recent offerings to know that I’m not really its target audience anymore.

Incidentally, when you’ve lost Bishop Barron, you know you’ve taken a wrong turn. I mean, the man is an excellent critic and can throw a strong rhetorical jab, but he’s also pretty charitable when it comes to contemporary media. After all, the whole “Word on Fire” thing of his is about engaging with and finding Christ in our modern culture, no matter how buried He may sometimes be. So when he watches your movie and falls asleep, and laughs at your protagonist…

The Bishop’s chief criticism of New Star Wars and the people involved with it comes down to this:

“The overriding preoccupation of the makers of the most recent Star Wars seems to be, not the hero’s spiritual journey, but the elevation of the all-conquering female. Every male character in The Last Jedi is either bumbling, incompetent, arrogant, or morally compromised; and every female character is wise, good, prudent, and courageous.”

I don’t want to say this 3rd-wave feminist mindset isn’t concerned at all with good storytelling, but certainly it’s far more interested in intersectionalist narrative and female/minority empowerment (whatever that means) than overall quality. That is to say its agenda is not entertainment but messaging.

I noticed this apropos thread in my Twitter timeline this morning and picked out a couple pieces: 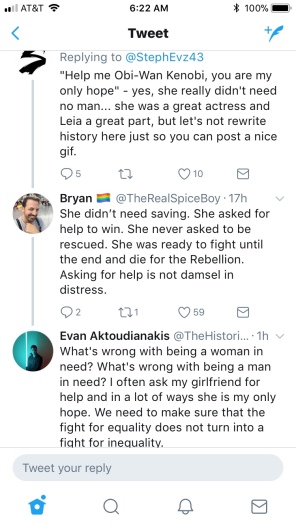 Obviously not everyone is buying into this baloney, but the whole line of thought seems to be indicative of an all-too-common reductivist false duality: Either a female character is a Strong Womyn who needs help from no man or else she is a regressive damsel in distress and of no use to us. #NotMyPrincess

For the sake of brevity, I won’t delve into the character of Rey in The Force Awakens or the chick from Rogue One (I honestly don’t even remember her name). Let’s talk about Leia and the original trilogy.

The fact is, yes, she was a damsel in distress. Quite literally – she was a princess in mortal peril (about to be executed) upon the Death Star. Whether the princess can or does physically ask the knight to rescue her from the dragon’s lair is irrelevant.

She was again saved at Jabba’s palace by Luke and Lando.

She was also a strong female character. The two facts are in no way contradictory.

The thing is, even though the characters of the original trilogy fall into certain archetypes, they were layered. They developed. They all had strengths and weaknesses. And none of them were defined exclusively by their sex, race, or any other one element of their identity.

Let’s look at some more facts about the original trilogy, with a focus on Leia but keeping the other main characters in mind.

Luke: A farm boy who is good at flying. He is saved by Obi-wan twice early on in the film. Not a particularly great shot with a blaster. Not particularly quick to learn the ways of the Force. He is courageous, and he helps rescue Princess Leia. He is rescued by Han at the Battle of Yavin, allowing him to score the shot that blows up the Death Star.

Han: A somewhat greedy, roguish smuggler. He’s got tricks and skillz. Doesn’t want to bother with rescuing Leia until enticed by wealth. He’s gutsy and somewhat impetuous in a fight. He helps rescue Leia. Ultimately does the right thing and comes back to rescue Luke.

Leia: A princess with a lot of moxie. She’s got attitude and is willing to die for a righteous cause. Pretty good in a blaster fight (she might have even nailed a few more stormtroopers than Luke). Not a pilot; not a gunner; not a brawler; not a Force sorceress. She is rescued on the Death Star by Luke and Han and crew.

The Empire Strikes Back

Luke: He’s coming along. Does some jedi training. Rescued by Han early on on Hoth. Tries to rescue his friends on Bespin. Gets rescued by Leia when he’s hanging from a wire.

Han: Rescues Luke on Hoth. Shows some brains to match his fighting and flying skills. Woos Leia. Gets carbonited and his friends try to save him.

Leia: Does the courtship dance with Han. Admits her love for him. Kinda sorted rescued by Luke on Bespin, then rescues him. Tries to save Han from Boba Fett.

Lando: Put in a tough spot, he sells out his friend but in the end he decides to try to atone and make good.

Return of the Jedi

Luke: Helps rescue Han (and Leia). Instrumental in recruiting the Ewoks native to Endor to the cause of the Rebellion (and shows mercy in resolving the capture of him and his friends peacefully). Finishes his character arch as a space knight/wizard. Redeems his evil father. Still not insanely powerful in any regard, though the guy’s a man with his own skillz now.

Han: Rescued by Luke, Leia, and crew. Now he’s all-in with the Rebellion and with Leia. When he thinks she loves Luke, he’s even willing to step aside for the sake of their happiness. Quite a bit of progress from the selfish smuggler from the first film.

Leia: Helps rescue Han, then is rescued by Luke. Slays Jabba the Hutt personally. Fights alongside Han (and Luke) on Endor.

Lando: Helps save Han (and Leia). Plays an instrumental role in destroying the second Death Star, along with the heroic Nien Nunb.

So for the original trilogy, here’s my rough count:

(I’m not counting Lando here and only really listed him above because yes, there was a major black character in 1980 who did heroic and cool things. Finn was not the first.)

See, the thing is, in Star Wars a bunch of friends and comrades help each other out. They are all rescued at some point. They all need help. And they all reciprocate. Unless you give Luke an extra credit for blowing up the Death Star, Leia’s actually got a better ratio going than him! So yes, she needs rescuing! She also helps save her friends!

The pitting of the sexes against one another is idiotic. Luke, Han, and Leia are all brave. Luke and Han are men, and they show it. Leia is a woman, and she shows it. 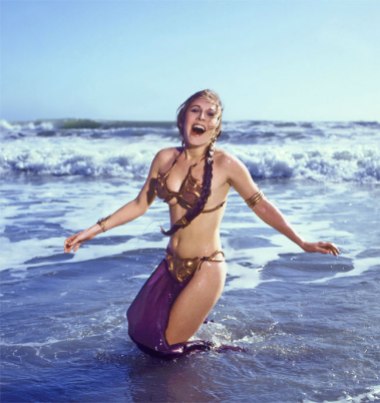 There’s nothing shameful about this at all. She was a great character and a strong woman back when the men of Star Wars were strong and great, too. Before they were forced to compete and lose by inferior, agenda-driven writing. Back when she was Princess Leia and not General Leia. And the greatest sin here isn’t the incorporation of certain values and beliefs into the new Star Wars stories; it’s that it’s become so central as to render good storytelling secondary.